Back in July, I wrote up my list of Q3 Finish-a-Long goals, with high hopes that I would complete all three of my works in progress by the end of September deadline. Here's finish three out of three. Yes, you read that right, I completed all of my goals for this quarter!


I proudly present to you.... Rainbow Girl! 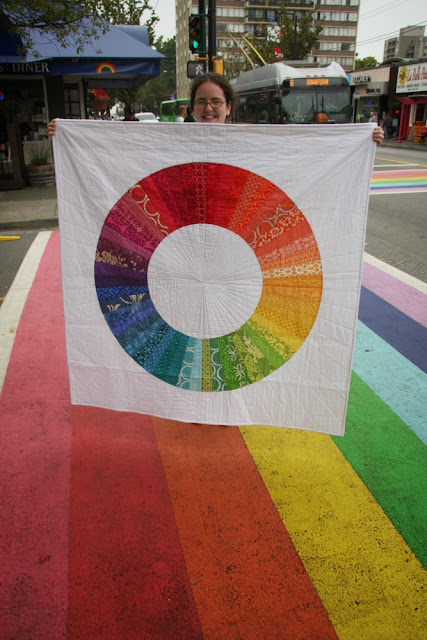 This quilt has been a labour of love and I'm so excited to see it finally finished! I started selecting fabrics for the colour wheel back in Spring of 2010 and finally stitched on the label in September 2013. Three and a half years is quite a long time to make one quilt, but if I'd finished it earlier than July 2013, I wouldn't have been able to get this awesome picture with the newly-painted rainbow crosswalk in Davie Village in downtown Vancouver. It was meant to be!

I was inspired to name this quilt "Rainbow Girl" because that was the nickname my wonderful Grade One teacher Muriel Smith gave me after I painted many rainbows in her class. She once told me that a rainbow I had painted for her hung in her classroom from the year I was in her class until she retired!

I basted this quilt back in November 2012 and was eager to finish it, but anxious about ruining all my hard work with the quilting. My old Singer wasn't up to the task, but this February I brought home a new Janome 7700 and it just loved all the straight line quilting on this project! I entered "Rainbow Girl" into the Vancouver Modern Quilt Guild's special exhibit at the Northwest Quilting Expo and that deadline was the perfect impetus to get this project finished once and for all!

Amy Dame braved the mean border guards to get our quilts down to Portland, Oregon (yay, Amy!) and Bill Volckening wrote up a great review of our exhibit including a photo of my quilt. Thanks, Bill!

I've written a number of posts sharing my progress on this quilt, so this will just be a few details on the final steps as well as some glamour shots. 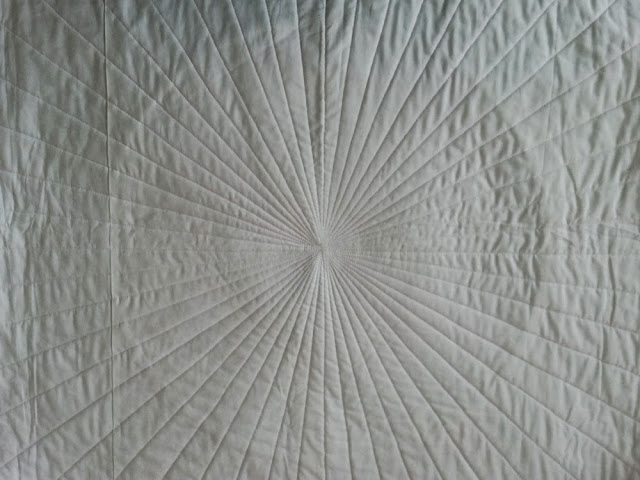 I quilted it as recommended in the pattern, with intersecting straight lines that remind me of the spokes of a bicycle. Because all the lines met in the middle, I decided on a thinner 50wt thread (Aurifil 2021 Natural White). Believe me, I was scared to see what would happen when all those lines came together, but it worked out beautifully! 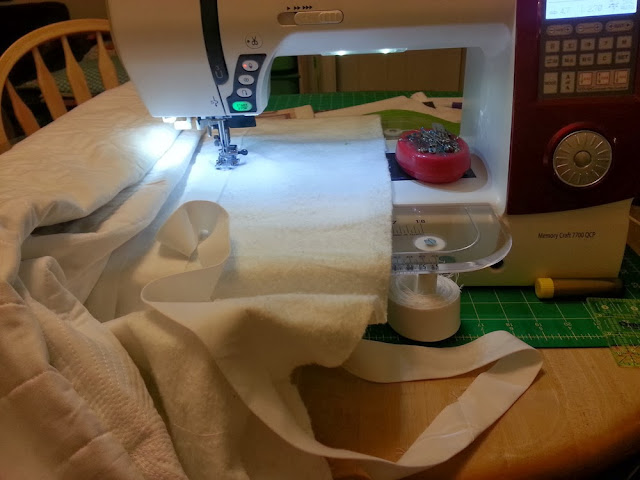 When adding the oodles of boring white binding, I kept the binding neatly rolled around the leg of my extension table. 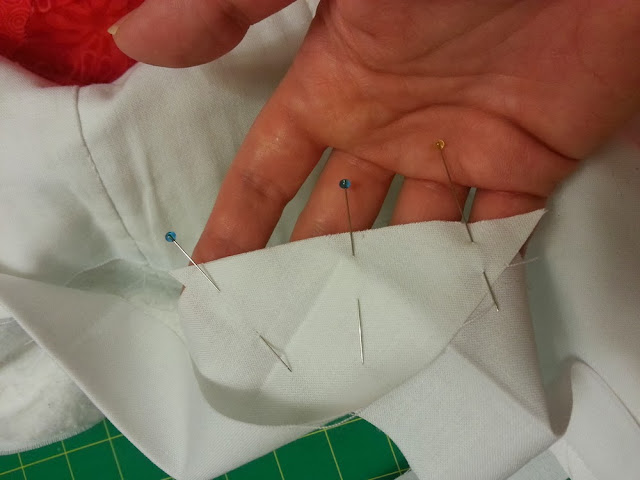 This was the first time in my nearly twenty years of quilting that I joined my binding rather than tucking in one end! I used the Perfect Binding Tutorial by Julie of Jaybird Quilts and it was clear and useful! I love the way you can't tell where you started sewing on your binding. Note to self: when joining the two ends, leave a dog ear on each side before you sew your seam and the strips will line up when you press the seam. 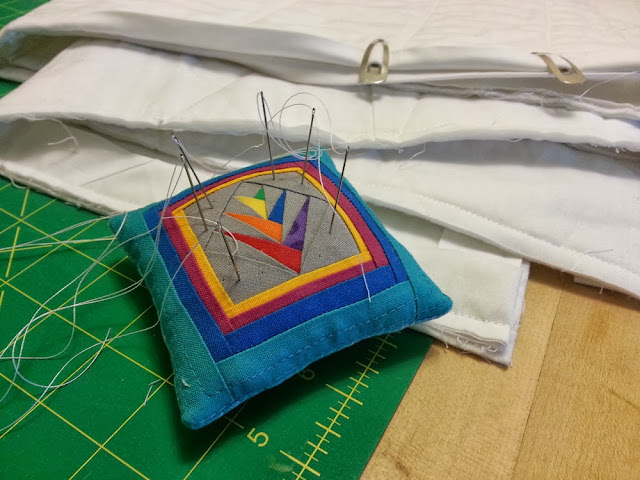 Another first, when I hand stitched the binding, I loaded up six needles at a time so I wouldn't have to break my rhythm when sewing. Loved it! (cute pincushion is a gift from Amy). 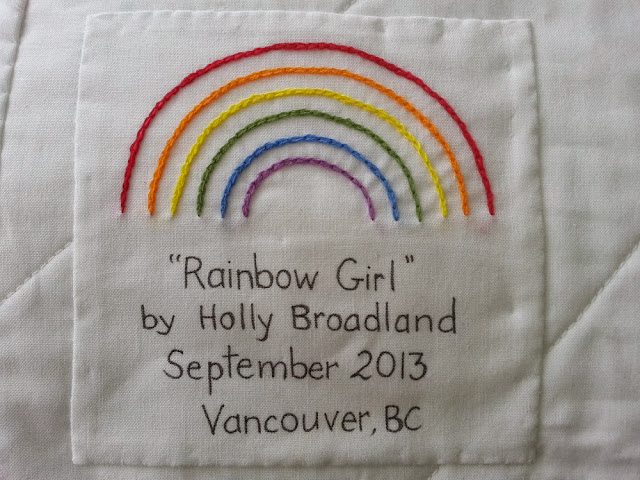 I wanted the label to be special after all the work I'd put into this quilt, so I chain stitched a rainbow. I had never chain stitched before, but the Easiest Chain Stitch tutorial on Sublime Stitching made it simple. 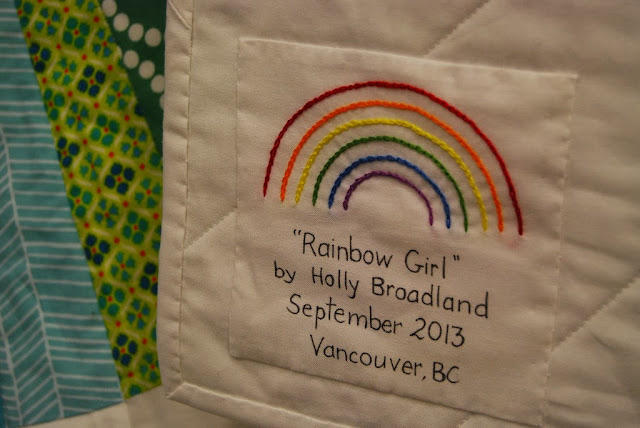 And now for a few more beauty shots! 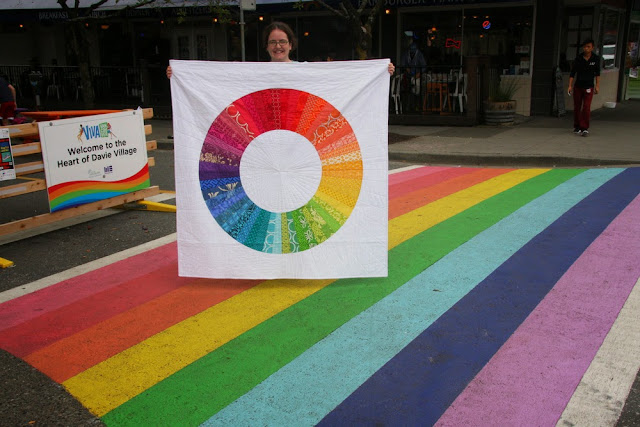 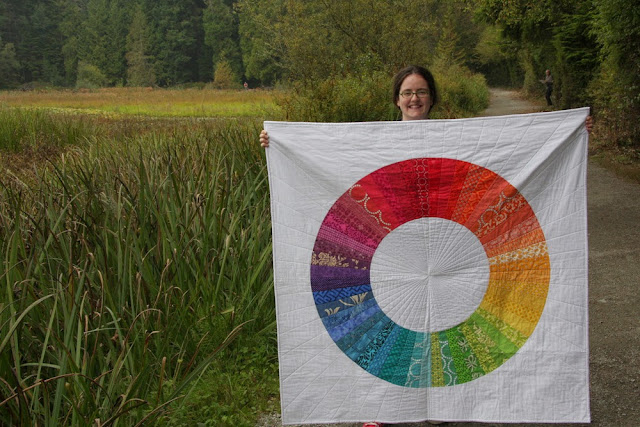 At Beaver Lake in Stanley Park 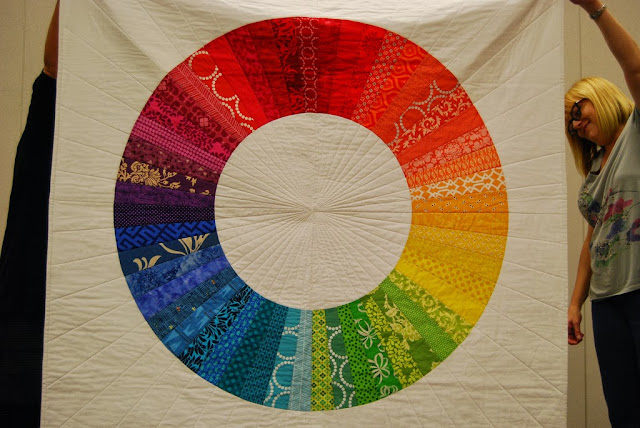 At Show and Tell at the Vancouver MQG meeting, Photo by Michelle McLatchy

Quilt Stats
Name: Rainbow Girl
Size: 56"x56"
Pattern: Color Wheel Quilt from Last-Minute Patchwork and Quilted Gifts by Joelle Hoverson
Fabrics: Tons of Kona white, plus 52 scraps of a rainbow of colours, some from my stash, some swapped with friends (especially Barb), and some purchased for this project
Batting: Warm & White (thanks again to Krista for catching me before I used Warm & Natural for this bright white project!)
Quilting thread: Aurifil #2021 50wt
Timeline: Started in March 2010 (before the Vancouver Modern Quilt Guild even had its first meeting!), basted in November 2012, completed in September 2013.
Total project time: 3.5 years!