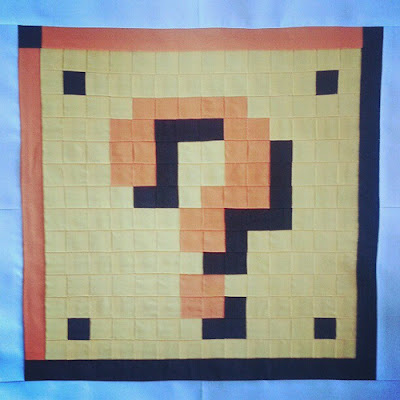 I'm happy to share my completed Super Mario block today! It was due way back on Halloween and I've been feeling badly that I've fallen behind in the Fab Bee. Now I'm nearly caught up! Eryn was the queen bee for October and she chose the fun theme of Super Mario. I knew that I wanted to make a pixellated block just like the ones made for Angela of Cut to Pieces' Super Mario quilt a-long. Since I knew I definitely didn't have time for an entire Super Mario quilt at this time, this was a great way to try it out without the commitment! Thanks, Angela, for the easy-to-download layouts for the blocks! If you want to try this block, you can find the grid here.

I decided to make the question block because it was always full of happy surprises like coins, super mushrooms, and fire flowers. Good times! My kind husband took on the onerous task of playing some Super Mario Bros. and grabbing me a screenshot of a question block in action so those of you who aren't familiar with the game can see my inspiration. 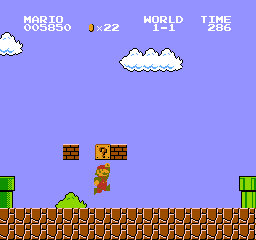 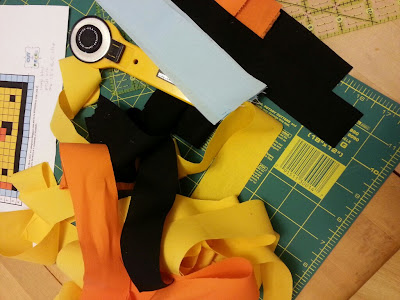 Cutting the strips. I used Kona cottons in black, canary yellow and orange. Eryn supplied the blue fabric and I'm not sure exactly what colour it is (it looks similar to Lake on my Kona colour card). 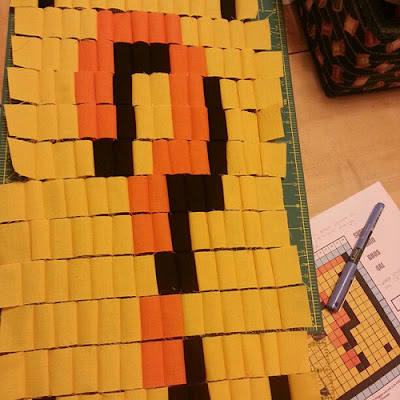 After the rows were pieced.

I pressed the rows in opposite directions and nested the seams. At the end, I decided to press the seams open to reduce bulk. 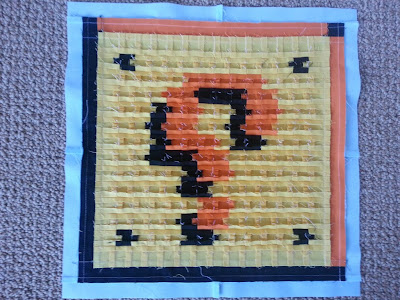 The back of the finished block

After cutting and piecing 196 tiny squares, I had the effect I was hoping for. My block finished at about 16"x16". I love it and can see more pixel blocks in my future!

Now I have a few days left to work on my November block for Lysa! I've been good and haven't even let myself open the cute envelope she sent me at the start of November. Can't wait to see the fabric she chose!


Hello Canada! If you've just arrived at my blog through Blogathon Canada, welcome! I wish I could invite you in and offer you some Celebration cookies, but I ate them all last night during a late-night sewing marathon. Today is an especially busy day for me, but I have time for a quick blog post before heading back to the sewing machine! 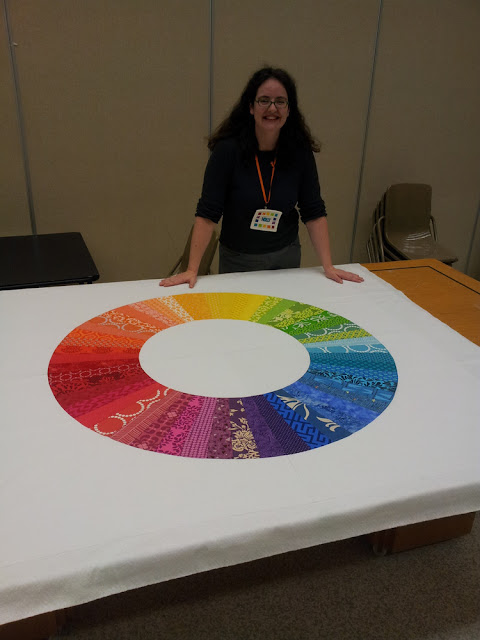 Hi! I'm Holly and I love modern quilting! I'm the founder and president of the Vancouver Modern Quilt Guild, a group of fabulous quilters who meet monthly (our meeting is tonight, guests are always welcome!) to connect, laugh, and get inspired. Since starting the VMQG in June 2010, my life has been enriched and I've made many amazing and talented friends. I'd recommend that you check our your local Modern Quilt Guild or start your own! 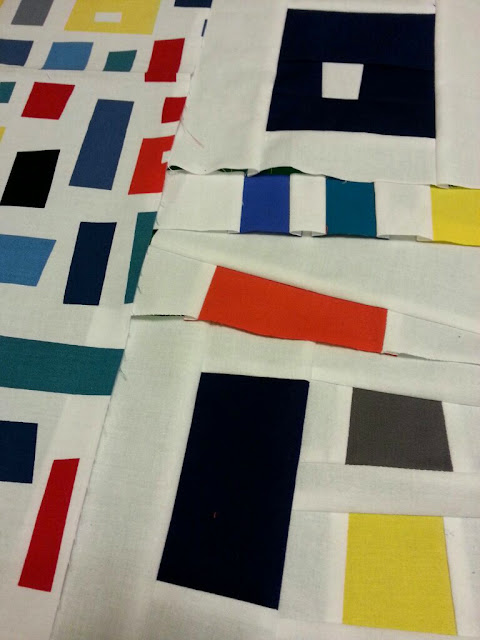 I'm currently working on my Kona Modern Quilts challenge project (due in less than 12 hours!) that uses fabric from local designer and just a super nice person, Cynthia Frenette. I also have a dozen other projects on the go, including my colour wheel quilt that I finally basted at the last VMQG sew-in! 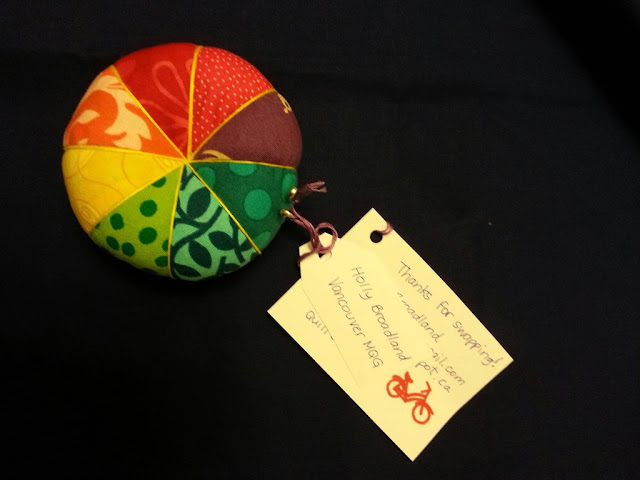 My most recent finish is a rainbow pincushion for a pincushion swap organized by the Kansas City MQG. The cool thing is that I'll be swapping with someone going to QuiltCon and I'm hoping to meet them in Austin, Texas in February!

I look forward to meeting new Canadian quilting bloggers through Blogathon Canada and I hope you have a chance to visit a bunch of new blogs! Thanks to Felicity and Cathy for hosting the BC leg of this tour!

Halloween has been over for a while now and most of the candy is gone. However, my last post promised some photos of our pumpkins and the girls' costumes, so here you are!

2012 was the year of the dinosaur in our home, so all our pumpkins were dinosaur-themed. 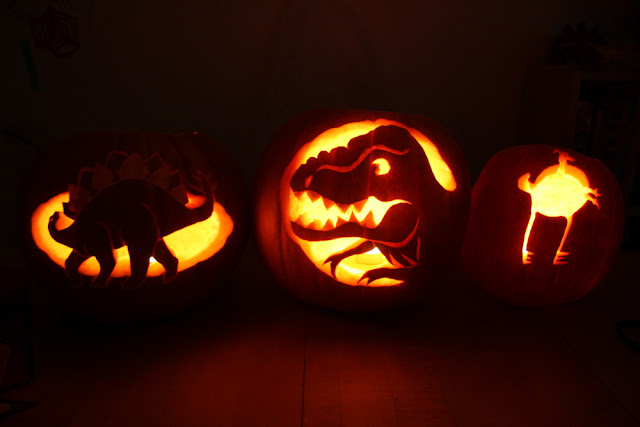 Sophia drew a Parasaurolophus and her dad carved it out for her: 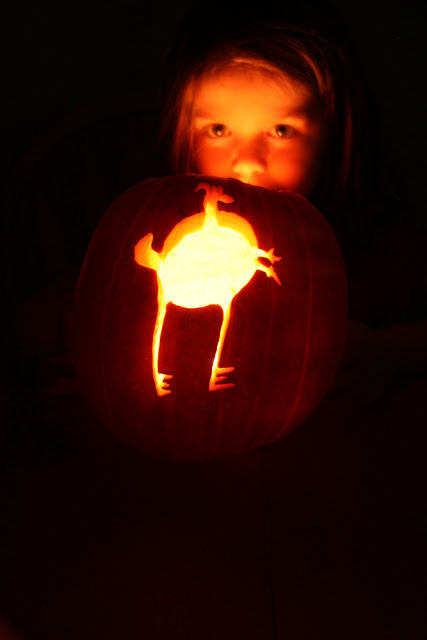 He also made a Stegosaurus pumpkin: 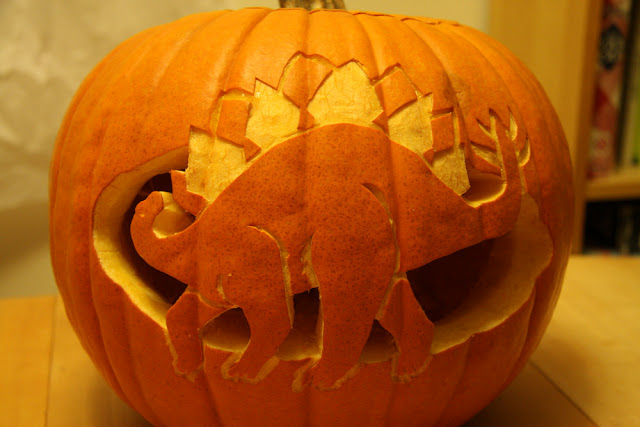 I used Sophia's realistic T-Rex toy as a model for my pumpkin: 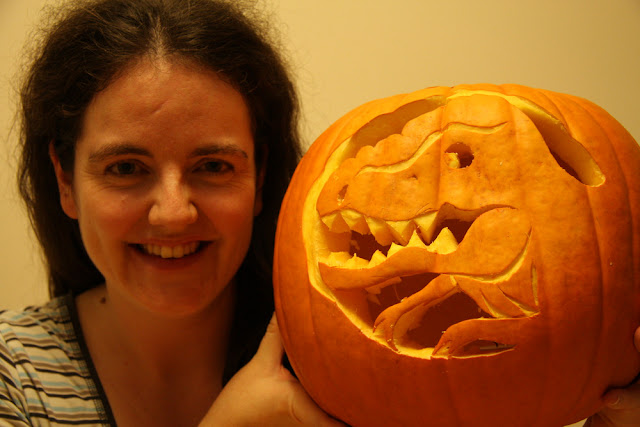 And I carved Ellie a T-Rex footprint on her tiny pumpkin: 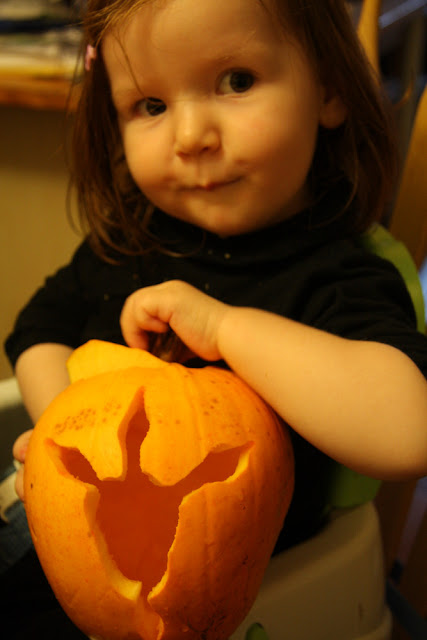 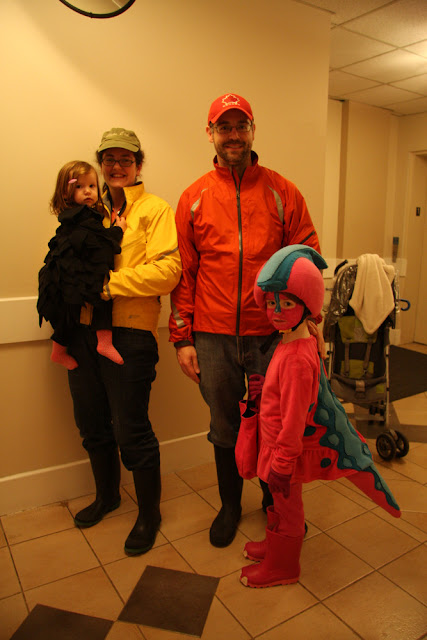 Eleanor was dressed as a crow. She was incredibly hard to photograph, but this picture captures the fleecy black feathers she wore. She kept flapping her arms and making a "whoosh, whoosh" sound.

We missed the worst of the downpour by going out relatively late at 6:30pm. Sophia was dressed as Perry Parasaurolophus from the tv show Dinosaur Train. 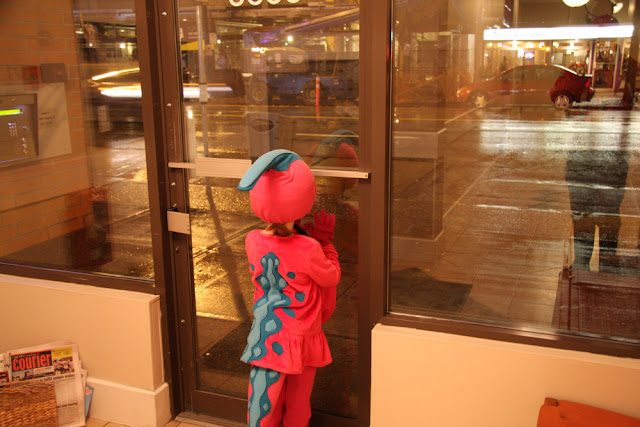 Note the bony crest created from an old bike fender covered in fleece. I used the dinosaur tails tutorial by Jessica of Running with Scissors to create the tail and modified it to match the wavy and spotted pattern on Perry Parasaurolophus. I love how it turned out and think every kid should have a dinosaur tail! 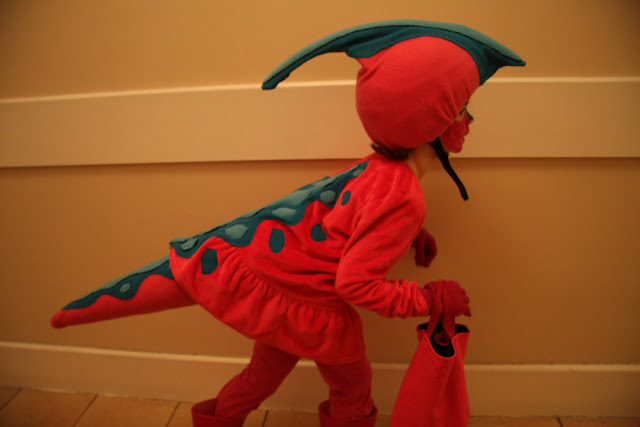 My little dinosaur was thrilled with her costume! 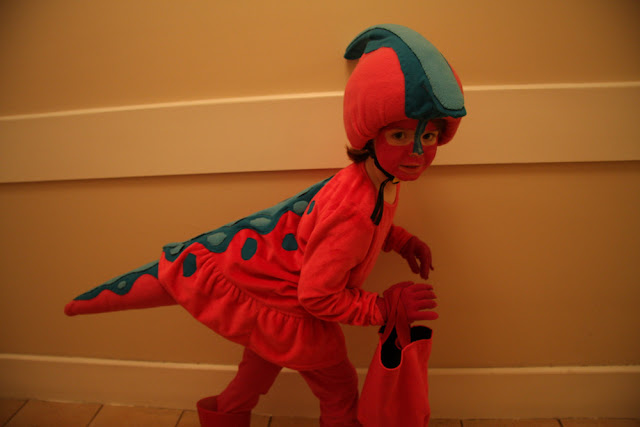 Now that Halloween sewing is over, I can get back to some quilting! I've got a Vancouver Modern Quilt Guild sew-in on Friday and I can't wait to spend some time sewing with my friends!