One of the many things I love about being a member of the Vancouver Modern Quilt Guild is going to our sew-in days. I had a great time at the January sew-in and although I spent much of the time socializing and keeping Amy from her sewing machine, I was actually quite productive! I managed to piece the blocks I'd received in the Red and Aqua Bee into a quilt top. Since I had sewn up my sample block at the very first VMQG sew-in back in January 2011, I thought it was appropriate to sew up the quilt top one year later! 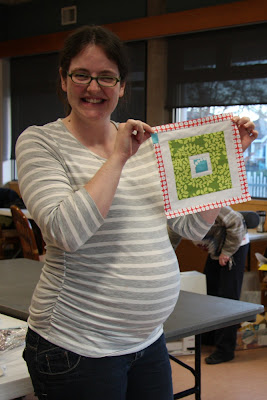 It was great to have a design wall at the sew-in so I could play with the blocks and get advice from my quilting friends. I'm happy with how the quilt is coming together and plan to give it to Eleanor when she turns one in March. Here's hoping I can keep up the motivation and finish this quilt by Ellie's first birthday!

Even though I haven't worked on this since January 22nd, I'm going to link up to Lee's WIP Wednesday on Freshly Pieced.